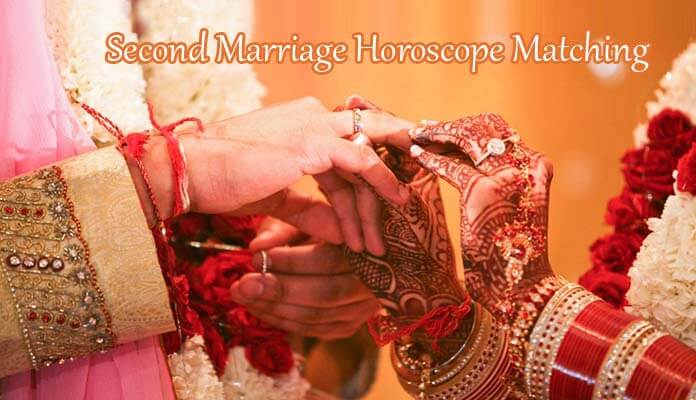 A Remarriage refers to a marriage which takes place after a previous marital or nuptial union has ended successfully- either through divorce or widowhood. There are some individuals who are more likely to get married again than others; the likelihood of a remarriage can differ from person to person based on the previous relationship status (i.e. divorced vs. widowed), the level of interest of the person in establishing a new romantic relationship again, the gender, race and age of the person among many other factors.

The concept of a 2nd Marriage or remarriage is becoming more and more relevant and popular nowadays. It would also be more relevant in the coming days ahead. The number of Divorces and separations is increasing rapidly in our society. As such, we need to analyze how to predict Second Marriage of a person in astrology.

The factors which are purely responsible for a remarriage or a second marriage in Vedic astrology are:

Ascendant – the nature and aptitude of the person, the mind and taste as well as his/her self identity

2nd house/lord– the longevity of spouse or the family life

Venus – the significator of wife

Jupiter – the Significator of husband

Why 9th House is considered the epitome for second Shaadi?

It has been mentioned several times that before venturing into any astrology yoga or second marriage prediction astrology given in our classics, one must crucially know about the culture thoroughly.

According to Hindu sastra, there is no OPTION for DIVORCE of a person. The promise which couples make in ‘7 phere’ is binding till the death relationship. In such a time attaining a divorce from a court does not hold value or end one’s promise; it only acts as a brute betrayal of promise by both the partners.

3H is referred as younger ones, the younger means ‘Born after’; therefore the 9H is 3H to 7H is the second shaadi.

Indication of Second Marriage in Astrology

Reasons of Failure of the Second Marriage:

How To have a Successful Second Marriage?

However, it is necessary to go for a consultation before proceeding for any remedies since it as a crucial part of the entire life of a person. So it is better that the couple discusses their kundlis or share their date of birth online for queries and analysis related to second marriage with a good and expert astrologer.

Get Solutions of Questions like Is There Second Marriage in my life?

How to Find Second Marriage in Kundli?

With the help of Vastu also, a person can have a Happy Married Life with Vastu.

In addition to that, one can also look for astrological love divorce problems in husband and Wife. For the parents who are seeking good match and a happy married life for their daughter, they can go for astrological Happy Married Life of Your Daughter readings to do an analysis of the daughter’s horoscope.