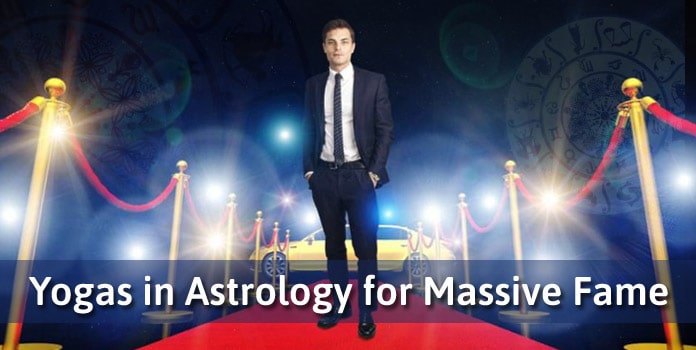 Who doesn’t want to be rich, famous and successful? Well, we all want to be but only a few people are blessed with it. This is because of the yogas in astrology for massive fame in horoscope which are present in very few kundlis. People often think that just by having Dhan or Raj yogas in astrology they have the best astrological combinations for riches but it is not true.

In this post, we have come up with the yogas in astrology for massive fame. Learn about the best yoga in horoscope as per fame astrology.

Most Powerful Yogas in Vedic Astrology to Become Famous

Let us find out the astrological combinations for massive wealth in astrology. And if your horoscope has them, fame in astrology is guaranteed.

Moon and Its Position

Fame is indicated by Moon and therefore, it is important to consider the position of Moon in the horoscope.

Whether a person will be blessed with fame or not, it will depend upon the houses:

Lagna in the horoscope has to be very strong because that will determine the status of fame for the native:

Just like Moon, Saturn also plays a significant role in defining the status of fame and success in horoscope:

Position of Venus is also weighed while considering fame in astrology:

Sun is an important planet and therefore, its position is also significant:

Other Astrological Yogas for Fame

Here are some more astrological yogas for fame that are also very important:

So if you want to enjoy massive fame in life then all the points mentioned above have to be considered in a horoscope.